It’s always a good idea to check download speed to see if your internet is fast.

Have you ever wondered “Why is my browser download speed so slow?”

“Why is my download speed so slow on Steam?”

Well, there are a bunch of things that can cause poor download speed, especially when it comes to the WiFi network.

Yep, in this article, MySpeed is going to help you answer the question “why is my download speed suddenly so slow?”. 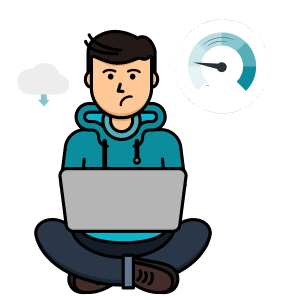 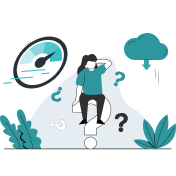 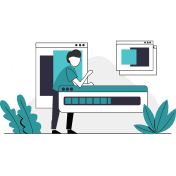 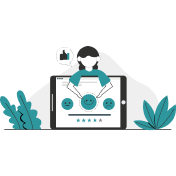 It is one of the important metrics that let us know how good an internet connection is.

Well, to put it simply, this term refers to the rate (number of Mbps - megabits per second) that the digital data travels from a server on the internet to your device.

The digital data here can be in the form of videos, images, text, audio, and files.

Do you know that so many online activities require us to download data?

Yep, that’s true. And these activities include web browsing, listening to music on Apple Music, streaming videos on Netflix, etc.

For sure, a good and adequate speed for downloading data is vital. Without it, it’s so hard for us to smoothly engage in and enjoy our favorite online activities.

Though some people need fewer Mbps while others need more depending on their specific online activities, that’s a good speed for most people.

These days, with just some download speed test, it’s so easy to know how good your connection is.

Consider this scenario: you are watching a favorite show on Netflix, but it keeps buffering due to your bad internet download.

It must be so annoying, right?

And what’s about downloading a large file with a sluggish internet connection?

Needless to say, it must take you hours to save the file to your device.

These are just two of countless examples of how slow connection and speed issues cause bad internet experiences for us.

So, what are the reason for bad download speeds and “Why is my download speed so slow but upload fast”? Let’s move to the next part of this writing to find out!

Many things can be the reasons behind not good WiFi download speeds.

From your outdated router, wireless interference, to bandwidth throttling, … any of these causes can result in poor internet performance.

Following are popular reasons for “why is my download speed not what I pay for”.

For sure, you don’t need a high network bandwidth if you just have one single device connected to the network and engage in basic online activities like web browsing, email checking, social media scrolling, etc.

However, you will need much more internet bandwidth if your house has multiple devices using the internet,

Which participate in activities requiring a heavy download of internet data, such as streaming, downloading large files, and more.

Internet data flowing to your home network works quite like a water pipe.

The more devices use the connection simultaneously (and perform heavy use), the slower it’ll be for everyone since each one just gets a fraction of the bandwidth.

So, a low internet plan with inadequate bandwidth might be one of the top reasons to consider. 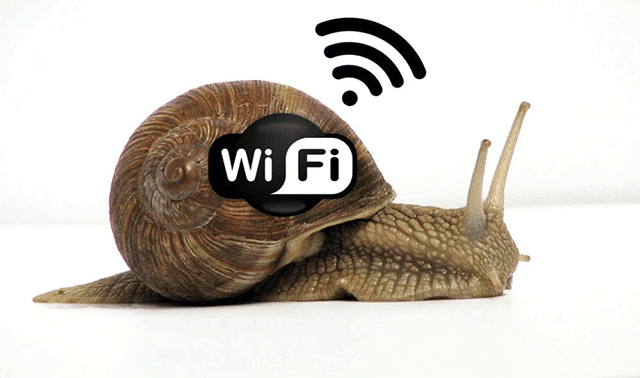 Problems with the Router

Wonder “Why is my wifi download speed so slow?” Your router might also be the source of the problem.

Bad router spot, outdated router, and running the router for a long time without restarting it can cause slow WiFi downloading speed.

Acting as a wireless access point, your router, well, if it’s in a bad spot in your house, there’s no surprise if your internet access is slow.

The environment around the WiFi router can significantly affect the quality of your wireless network.

We all know that Wi-Fi signal travels through the air within a certain range.

Due to that, placing the router in an inappropriate position such as: under the shelf, or in your concrete-walled basement,

Or somewhere that does not allow the wireless signals to spread well and equally around the house, high chances are that your connection gets slowed down or even blocked.

Run for a long time without restarting

Most electronic devices and equipment, including the router, are not made to run continuously.

Similar to PCs, smartphones, or others, modems and routers can sometimes get stuck in an overloaded, slow state.

If that’s the case, it’s sure that the equipment can’t be in the best condition to offer as good download speed as it should be.

Outdated routers may also lead to issues with your WiFi connectivity and slow down your internet connection.

Older routers, in fact, run old wireless standards. As a result, they may not be able to support fast signals.

Let’s say you have a plan that supports the speed of hundreds of Mbps, but the old router just supports less than 100 Mbps, then you know that your connection can’t be as fast as you expected.

If you wonder “why is my download speed so slow when I have fast internet?”, well, that can be the reason. 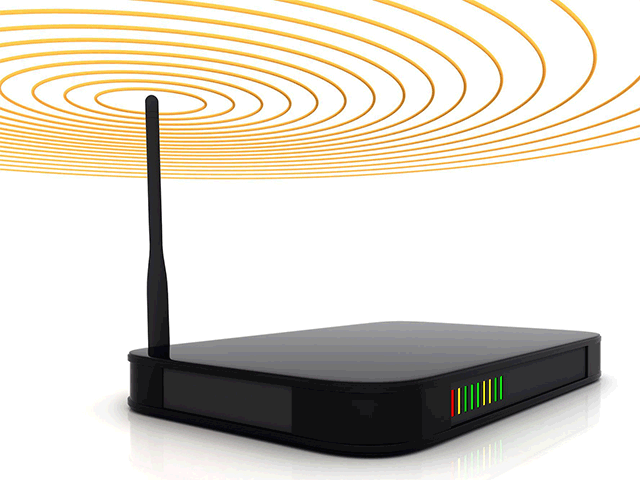 As transmitted through the air, WiFi signal strength tends to be highly prone to various factors.

In many cases, sluggish WiFi can result from problems with the wireless connection’s quality, signal strength, and other factors.

WiFi is not as fast and stable as the wired

When it comes to mobility and flexibility, WiFi connectivity outweighs wired one.

But speaking of consistency, stability, and speed, the wired connection (cable internet) seems to be more advantageous.

For gamers, it’s considered better to play games over a wired network. 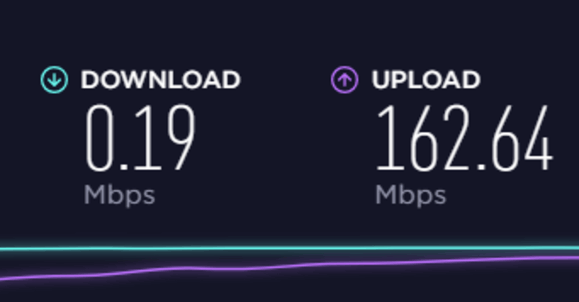 Once again, WiFi signals are transferred through the air, and they can get weakened or even entirely blocked by different causes.

In which, distance, wireless interference, and physical obstacles are most common.

Therefore, if blocking objects like these stand between your connected devices and your router, weak WiFi signals and slow internet speeds can be expected.

From the router, WiFi signals travel within a certain range.

And the further your connected devices are from your WiFi router, the weaker your signal, resulting in poorer downloading speed.

They work in the frequency range of 2.4GHz, which is proximate to or at the same 2.4GHz WiFi band.

Due to this, these devices’ frequency can overlap with WiFi signals’ frequency, causing the internet signal to be disrupted or weakened. 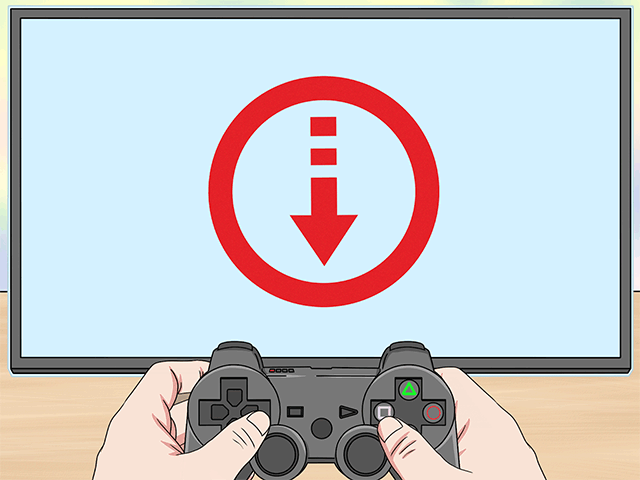 Like traffic lanes on the roads, internet connections have limited capacity.

That means when too many users are on the network at once, causing it (the network) to handle more traffic than it can do, slow speeds are certain.

For example, during peak hours, when people are online at once, clogging the network with their downloads and uploads, your connection will slow down. 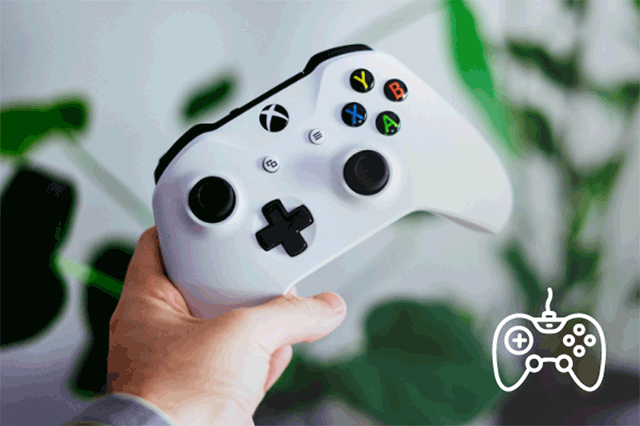 Sometimes, the problem might not lie in the quality of your internet connection or the router - it might lie in the devices you use.

Hence, if your PC, smartphone, tablet, gaming console, etc are outdated and unable to process today’s WiFi speeds, then you know that the reason is likely to be here, right? 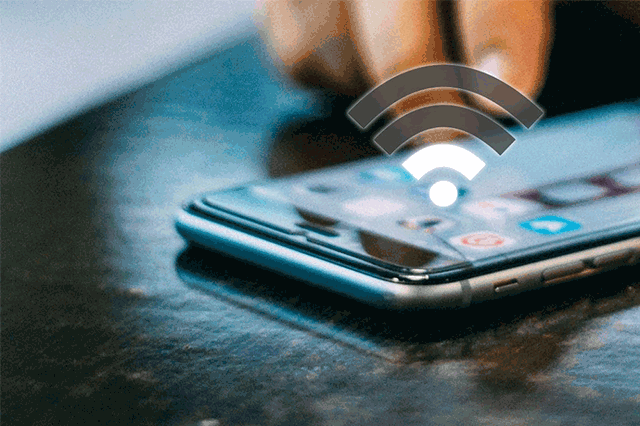 Also see: Why is my download speed so slow Comcast

Unnecessary background programs and applications can hog your internet bandwidth, slowing down the connection.

Also, it’s worth noting that the downloading process relies on the processing memory of your device.

When too many programs open and run on the device, the processing memory will be used up, ending up affecting your internet downloading speed.

So, if you experience iOS or Android wifi slow download speed on your smartphones or tablets or slower-than-usual internet on your PCs, consider this and other causes.

or other apps and programs to boost the speed (without determining the major causes for slow download and fixing them) can be not enough to improve your internet performance.

Your computer’s health can affect the Internet connection. And viruses and spyware are two of the most frequent reasons causing poor Internet performance, according to microsoft.com.

They can slow down your whole system, which, of course, includes the internet download and upload speeds.

But do you know that firewalls - one of the most essential security features that defend against viruses and malware penetrating the system, can also potentially slow down your Internet speeds?

This is because it monitors and evaluates every data and communication from the Internet.
However, the slowdown caused by a firewall shouldn’t be considerable, unless you have set a very high level of security that gives your firewall more work to do, as per ehow.co.uk.
Note that running multiple software firewalls at the same time can also decrease your internet speed quite significantly. 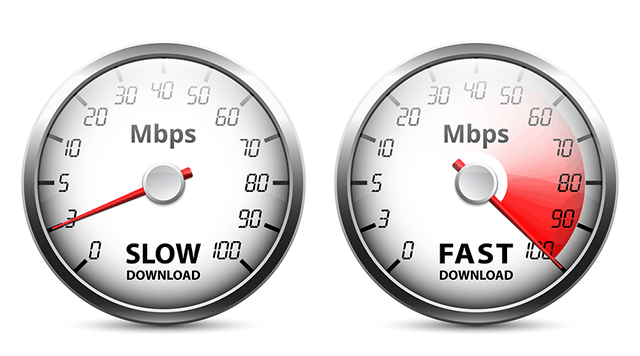 When it comes to slow internet or slow download speeds, throttling can be a cause to consider.
Throttling is when the Internet Service Providers (ISPs) intentionally limit the connection’s bandwidth, resulting in a slower speed.
Internet providers can throttle your connection for several reasons, such as network congestion, exceeding data caps, etc.
Also, there might be technical problems with your internet service causing the connection to be slow such as the inefficient communication between your router and the ISP’s network,
or an issue with your ISP’s equipment, etc.

These are some popular causes for issues regarding downloading speeds.
Now you know “Why is my download speed so slow all of a sudden?”,
Right?
Of course, there are still other possible causes for slow internet that we couldn’t include in this post.
Still, we hope that they are helpful to you. And that’s all for this post. Want to know how to increase download speed? Check out MySpeed’s next blog post to get the solutions.
Tags • why is my download speed so slow
Rating:4.7 - 50Votes
Share
Related Posts
All post