Google stadia internet speed test. How fast does the speed need to be?

Google stadia internet speed test - Google has released a nifty speed test tool that will test your internet connection and provide you with an idea of what to expect when utilizing Stadia. Find out which speed test page is best for you to ensure that you get the most out of Stadia. A Stadia internet connection speed of 10 megabits per second (Mbps) or greater is the minimum recommended to use. A slower network speed can cause issues while you play games. To play at up to 4K resolution, you'll need an active Stadia Pro subscription and a network speed of 35 Mbps or greater. Even if you've signed up for an internet plan of 10 Mbps or greater, we recommend that you test your connection on the device you'll use in the location where you want to play.

If your connection speed is slower than 10 Mbps or your home experiences an unstable internet connection, you might want to contact your internet service provider (ISP).

Stadia gaming experience may consume a significant amount of data. It is strongly advised that if you select the Use mobile data option on your mobile device, you watch your data consumption to avoid surprise data expenses. 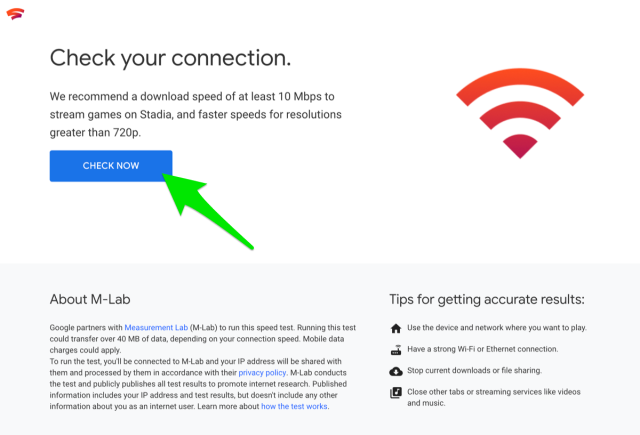 This speed test is being conducted by Google in collaboration with Measurement Lab (M-Lab). Depending on your connection speed, this test could transfer over 40 MB of data. It's possible that you'll be charged for using your phone's data.

You will be linked to M-Lab in order to complete the test, and your IP address will be shared with them and processed in accordance with their privacy policy. To support online research, M-Lab runs the test and publicly publishes all test results. Your IP address and test results are included in the published material, but no other information about you as an internet user is.

This type of speed test technology can be used to determine a variety of things, including:

Data that was lost along the route and had to be sent twice before reaching its destination is referred to as packet loss.

Jitter is a variation in the time it takes for data to arrive at its destination.

We are not certain, but we believe the Google speed test is done straight from the router that is nearest to the internet. When you do a speed test from your browser, it is influenced by factors such as computer and network card speed, as well as the strength of your connection to your routers. So, yeah, those figures are accurate. If you want to boost your computer's internet speed, use an Ethernet cable and a gigabit network card. Test your internet speed with the best tool available:

The download test, Wi-Fi speed test, upload test, latency test, ping test, and jitter test are all used in the Optimum by Altice speed test to rate the network connection. Using an appropriate troubleshooting step may be advantageous if you get undesired results.

How to check the speed of computer? How to check the speed of computer?

The speed of your computer's processor is measured in megahertz (MHz) and gigahertz (GHz) (GHz). For Mac computers, the recommended speed is at least 800 MHz and 1.5 GHz for Windows PCs.

Your computer's memory, often known as RAM, is the storage space it uses to store and read data. The faster your computer can open and run programs, the more memory it has. All PCs should have at least 1GB of RAM, and more is ideal. A RAM module is a piece of hardware that can physically increase RAM to your computer. There are still some questions about Google Stadia, but perhaps this has helped you determine whether Google Stadia will operate well on your network or whether you will need to update your Stadia.