News and Interests on the Windows 10 taskbar is soon available

The latest, and maybe the biggest, change to the Windows 10 taskbar offers users quick access to relevant and high-quality news and information. Read along for more details. 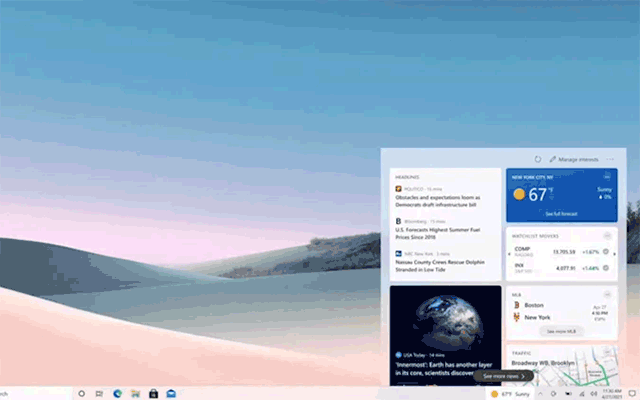 Microsoft announced the new updates to its Windows 10 taskbar via a blog post on its official website. As per the post, Microsoft is introducing the new “News and Interests” feature in Windows 10, giving users quick access to a feed of personalized content that is updated throughout the day.

The new “News and Interests” feature creates a shortcut that allows users to check the weather directly in the Windows taskbar. Hovering over the weather information located in the taskbar, users will also see a feed of the latest news, sports, weather forecast, traffic, and more. Users can save articles for later reading and even share them if they want.

With the new feature, it’s easy for users to personalize and tailor the content to their interests. According to Microsoft, users can decide on which information cards (weather, sports, finance, traffic) are included in the panel and how the weather updates are displayed.

Windows users can not only choose from a variety of topics but also select the favorite publishers and even tell the system which news stories that they'd be interested in reading to better tailor the add-on for their preferences. It’s also possible to turn off this panel if a user doesn’t have any interest in it.

As noted on Microsoft’s blog post, the new “News and Interests” panel on the Windows 10 taskbar would start rolling out to customers over the next few weeks. So, it might take a while for this new feature to appear on your desktop. As noted by SlashGear, it would be several months before it is broadly available.