Compare Mediacom vs CenturyLink: Which Internet Provider should I choose?

Mediacom vs CenturyLink is available in dozens of states as well as offers plenty of attractive speed packages.

We’ve made an in-depth comparison between them to show how the two ISPs go head to head with each other. 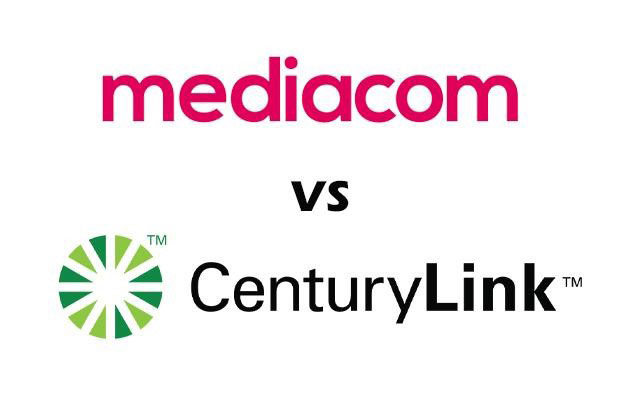 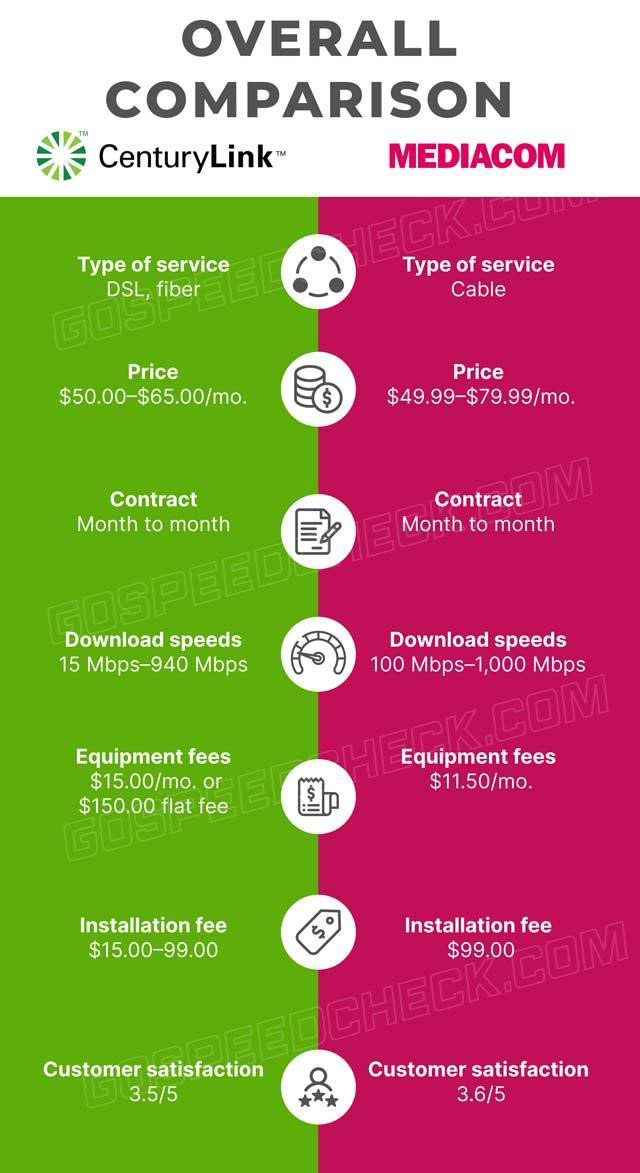 A comparison of Mediacom vs CenturyLink

Mediacom vs CenturyLink: Packages and pricing

Whilst, CenturyLink Internet plans are DSL and fiber connection.

Mediacom vs CenturyLink: Who has the fastest Internet speed?

Which ISP has the fastest Internet speed: CenturyLink vs Mediacom?

This depends on several factors such as Internet speed, Internet types, and others.

The basic DSL Internet plan delivers up to 100 Mbps at about $50/month which allows customers to do basic stream and browse the web.

For larger households with many heavy-bandwidth activities, you need to pick the CenturyLink fiber plan.

Mediacom offers a variety of Internet plans, making it simple to select one that meets your specific budget and needs.

For example, the basic Access Internet 60 Mediacom package costs only $19.99 per month, has speeds up to 60Mbps, and can connect up to four devices at the same time.

In terms of the 100 Mbps plan, Mediacom goes ahead when providing it at $30 while you need to pay $50 for a CenturyLink plan.

However, a Gig plan over a cable network performs worse than that over a fiber connection.

Thus, if you want a cheaper price, you can pick the Mediacom plan.

If you want a reliable connection, let’s take the CenturyLink plan although the price is not higher too much.

CenturyLink has fiber and DSL Internet.

Fiber can give a super fast and reliable connection but it is also the least common of the 3 Internet types.

DSL has a maximum speed of around 100 Mbps, and a recent survey showed that in some cities where 15 Mbps or less was the only option available to CenturyLink's DSL customers.

In comparison, Mediacom's cable network can comfortably reach speeds ranging from 100 to 1,000 Mbps and everything in between, so you won't have to choose between "kinda slow" and "needlessly fast," as you might with CenturyLink.

CenturyLink is available in nearly 50 states and fiber service is in certain cities throughout the US.

Enter your ZIP code into the search bar at the top of the page to see if Mediacom offers service in your area.

Both CenturyLink vs Mediacom Internet have data caps.

On the other hand, CenturyLink has a 1TB data allowance on its plan.

If you find yourself exceeding your limit on a regular basis, you may want to consider switching plans.

Examine your fees to see if they exceed the cost of the upgraded plan.

You can also select TV packages, which group together curated programs for casual to avid TV viewers.

Mediacom vs CenturyLink: Fees and contracts

CenturyLink month to month contracts are convenient to switch providers without incurring penalties.

Mediacom also offers monthly contracts that do not require an annual commitment from the customer, so feel free to make a Mediacom change service.

So, consider additional fees of the 2 ISPs before choosing a suitable one.

Rent a modem and router

If you don't have much patience with technology, renting a router/modem from your Internet provider will save you a lot of trouble.

In the case of CenturyLink, you can simply pay $150.00 upfront to purchase the modem and router.

Buy a modem and router

You are also able to own a modem and router yourself.

This way allows you to have more control over security, advanced features, and prices.

Or it’s just because you want to boost your Wifi signal as much as possible.

CenturyLink and Mediacom both rank in the bottom percentile of our customer satisfaction survey in terms of overall satisfaction.

In a list of 12 providers, Mediacom came in second-to-last, while CenturyLink came in last. 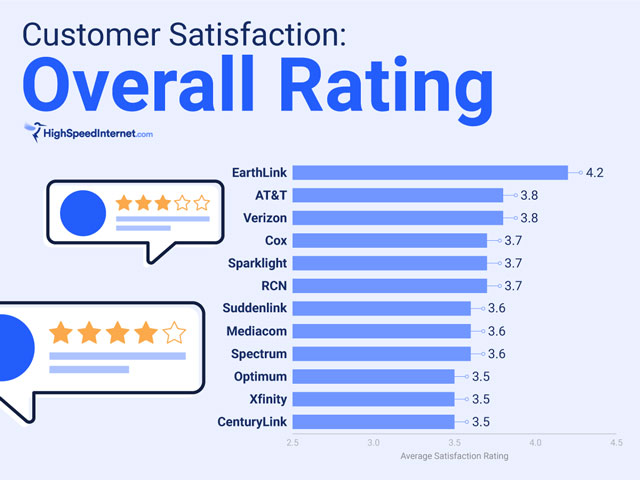 In terms of speed, 72% of Mediacom customers said in our survey that they usually or always get the promised speeds.

This is average when compared to other providers, but it is an improvement over Mediacom's previous survey results.

CenturyLink received low-speed ratings, most likely due to its extensive network of slow DSL service.

Mediacom vs CenturyLink: Pros and cons 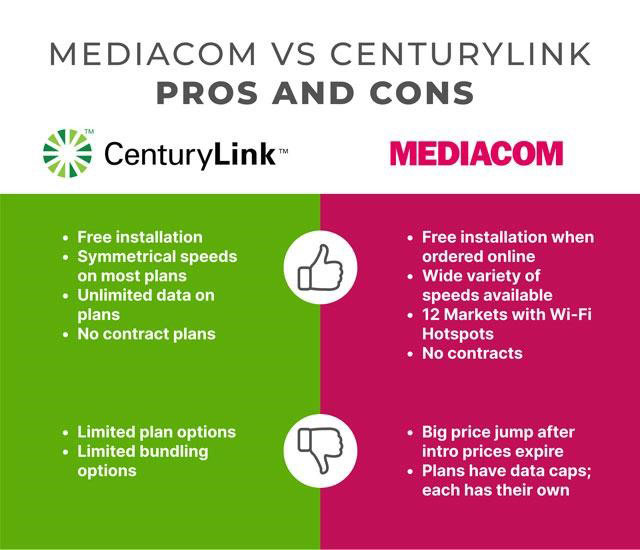 Pros & cons of Mediacom and CenturyLink

If you are looking for CenturyLink and Mediacom similar companies, you have notable options such as AT&T vs Suddenlink, Cox or Verizon.

Cox Internet is a telecommunications company that offers Internet-only plans as well as customizable bundles that allow you to mix and match TV and Internet packages.

They cater to both residential and commercial clients, with the latter receiving additional options for integrating security systems and cloud services.

Their most affordable plan begins at around $50 for the first 12 months of subscription.

However, due to popular demand, AT&T now offers a 5Mbps Internet speed plan for those on a tight budget.

This ISP is a good option for you if you want to save money. 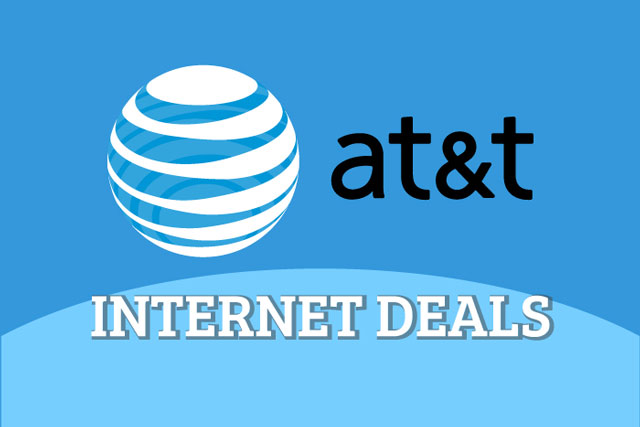 Verizon Fios is well-known for providing residential and business clients with a dependable, stable, and high-speed Internet connection.

It's a top service provider for professional gamers and streamers.

Currently, Verizon fiber has limited coverage so you need to check its availability before installing it.

Installation can take up to six hours, depending on how much work is required, so you may need to take time off work.

2. Does Mediacom charge for modem?

Mediacom is a midsize cable Internet provider, and customers can rent a cable modem from the company for $13 per month.

You can avoid the fee by using your own modem, which must be at least a DOCSIS 3.0 model (and Mediacom recommends going with a newer DOCSIS 3.1 model).

3. How do I cancel my CenturyLink subscription without fees?

Normally, CenturyLink cancellation fee is $200 for a 24 month contract/

If you cannot cancel your account or remove services online, you must call or chat with CenturyLink directly.

That’s all comparison among Mediacom vs CenturyLink. Do you have enough proof to make a decision? Follow MySpeed for other interesting articles.