Do you get the speed check wifi result which presents the slow internet? A study by Epitiro, a UK-based research firm, found that customers lose, on average, about 30% of the data rate which their ISP ( internet service provider) offer when they use their home WiFi connection. Wifi transmits data using one of two radio frequencies: 2.4GHz (the older standard) and 5GHz (the newer standard). Most modern routers can switch between two smart routers, and can even choose the frequency that's best for you. Within these frequencies, there are multiple channels: 14 channels for 2.4GHz and 30 channels for 5GHz. Those are the basic principles of Wifi operation. Now we can explore some lesser known reasons why your Wifi is so slow and the best way to fix those problems.

MySpeed is a professional speed check wifi application with high accuracy giving you a really great experience. This speed ​​test for the internet allows you to test the download to upload speed of all the networks around you completely free of charge.

Ping speed is measured in ms (1/1000 of a second). It indicates whether your connection speed is fast and stable or not, if the ping returns high ms parameters, the network connection is not good, unstable, prone to jerky, lag. Furthermore, ping speeds of more than 150ms can cause lag while gaming, while less than 20ms is considered very low latency.

Download speed is the most important number, measured in megabits per second. It shows how fast data download to your phone. In detail, the test works by downloading multiple blocks of data to your phone, adjusting the size and number of connections to download as it runs. This maximizes the speed of your connection, ensuring it works as fast as possible.

Upload speed indicates the speed at which you are uploading data. Compare the results of your speed test with the speed given by the provider, to see if your wifi network is working well. The upload speed test works like the download speed test, but in a different direction. Your phone uploads blocks of data, with adjustments made to ensure it uses your entire connection range.

Conducting MySpeed - a good speed check wifi, you will get the results with high accuracy. If you get the poor result of your internet connection, these things below can be the reasons.

1. "Enemy" number one: WiFi network of a neighbor's house

Almost all family houses have a Wifi network itself, this can cause problems with channel overlap. Private homes can not meet this situation, but it is especially complicated in homes and apartments where there are multiple routers in close proximity. Channel overlap is mainly an issue for routers that can only transmit in the 2.4GHz band, or if the device can only receive a 2.4GHz wireless signal. Why? Because there are only 14 channels to broadcast. Two routers broadcasting on the same channel at the same frequency will experience interference. In addition, people can try and access your network which you do not know, and this can also slow down Wifi. 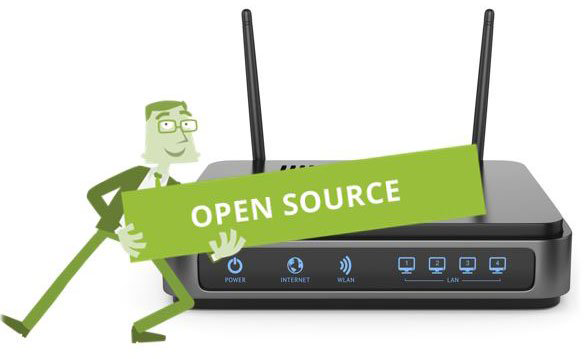 Solution: You should choose a good channel in the router settings. Modern routers can choose channels automatically, but sometimes it's better to investigate and find the best channel. Buying a dual-band router that can operate simultaneously on both 2.4GHz and 5GHz is also a viable solution. While the 2.4GHz band is essential to serving older Wi-Fi devices, the 5GHz band is like an "avenue with 11 lanes" that no one has heard of. This will significantly reduce congestion.

2. Location of the router

Do you know the location of the router also can affect internet speed as well as your speed check wifi ?

Normally, people place it in a "reasonable" location, near an area having a socket: a bookshelf, desk, or even on the floor. However, placing the router on the ground or behind other objects often makes the network speed considerably slow. Instead, set the router as high as possible to extend the radio's broadcast range. This also helps the router avoid interference. 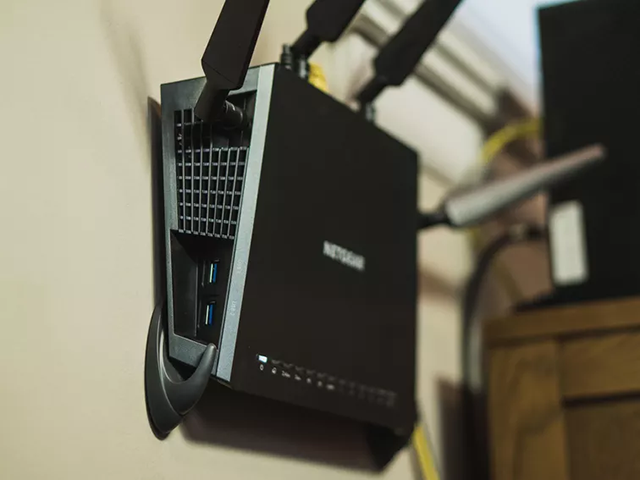 Besides, materials like concrete and metal often block Wi-Fi waves, but even objects with other materials can affect wireless performance. Therefore, make sure the router is not blocked by any other object, especially electronic devices. Also, avoid placing the router in the basement as this area is usually surrounded by a lot of concrete, almost impossible to penetrate the Wifi signal.

The closer the router your devices is, the stronger wifi wave it provides. Therefore, the best option is to place the router as close to the device as possible, but this is only practical if you have a primary area where the device is normally used. 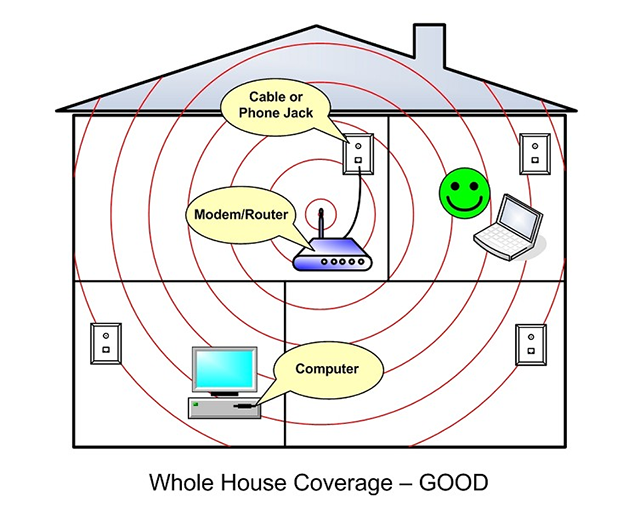 Solution: You should place the router in the center or in the room Wifi used for work and study, where many family members need to use it. However, it still can not broadcast 360 degrees. Therefore, you can install a Wifi extender or Wifi repeater to increase the ability of broadcasting, the speed check Wifi result must have been better.

There are a lot of broadcasting devices affecting Wifi signals which you do not notice. What are they? Why do they make slow internet speed and poor speed check Wifi results?

It can be strange but microwaves can interfere with Wi-Fi networks. Especially with old routers. This is because the microwave oven operates on the 2.45GHz band, which is close to the 2.4GHz band of Wifi. Specifically, the 2.4GHz band of Wifi can broadcast between 2,412GHz and 2,472GHz, so there are times when the ultra-shortwave frequencies may overlap with the Wifi frequency and when that happens, the data transferred will be interrupted. 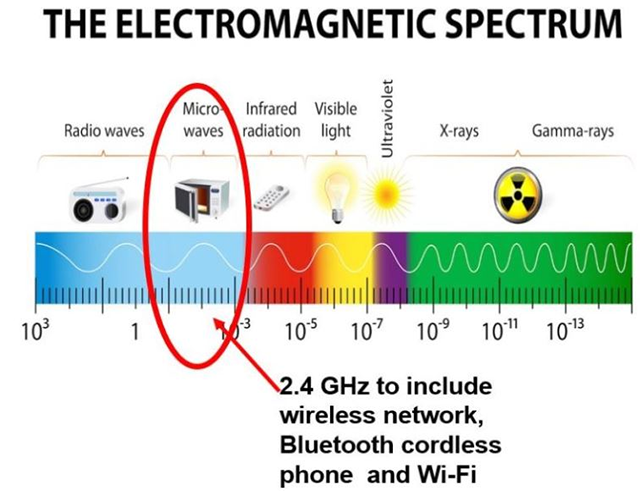 Besides, there are some wireless surveillance devices which operate on the 2.4GHz band, and they can interfere with 802.11g routers or single-band 802.11n routers. When choosing a wireless baby monitor, choose a 900MHz model, such as the Sony 900MHz BabyCall Nursery Monitor ($ 45). Alternatively, you can also purchase a system that is friendly to wireless networks, such as WiFi Baby 3G ($ 272), that can connect to your current wireless network.

Bluetooth also operates at a frequency of 2.4 GHz. To avoid frequency conflicts, Bluetooth manufacturers use frequency hopping with random signals that rotate 70 different channels, changing up to 1,600 times / second. Newer Bluetooth devices can also identify "bad" or currently in use and avoid those channels. However, interference can still occur, you should turn off the bluetooth when being closer to the router or place the router in another area.

For some routers, network security settings may affect performance somewhat. However, this doesn't mean you should disable security entirely, or apply a weaker level of protection. In recent years, the WPA (Wireless Protected Access) and WPA2 protocols have replaced the old and less secure WEP (Wireless Encryption Protocol) protocol. For expensive routers that use WEP, upgrading to WPA can be a little hit. In contrast, more and more automated devices often have hardware specifically designed for WPA and WPA2 encryption. Therefore, the strong security protocol does not slow down the WiFi speed on newer routers. 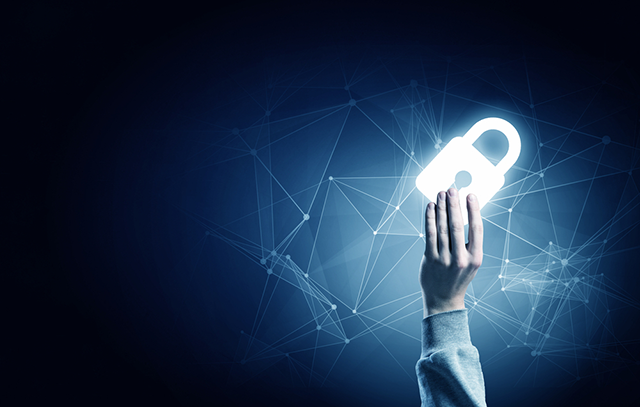 Solution: checking your router to know it is old or new generation. If your router is more than 3- year old, you should consider replacing it to have better online experience.

5. Firmware is out of date

Why upgrade firmware of the router? It is upgraded to improve performance and sometimes add new features or for both. It is advised that whenever you have problems, check if you have good firmware. Sometimes there are vulnerabilities in the firmware and the router manufacturer has already released a patch. When buying a new router, you should also check for the latest firmware.

Please always update the firmware. For older devices, it's a good idea to access your router's admin interface - usually through the web interface - to check for updates.

Speed check Wifi is a good tool which helps you check internet performance and MySpeed is a speed test favorited by many people. Conducting the test, get the poor result and you want to find reasons? In the article previous, we mentioned other 5 factors influencing internet speed. Today, we share 5 lesser known factors as well as suggesting the solution. Hope you catch the useful information and apply to have a good result in the next test.